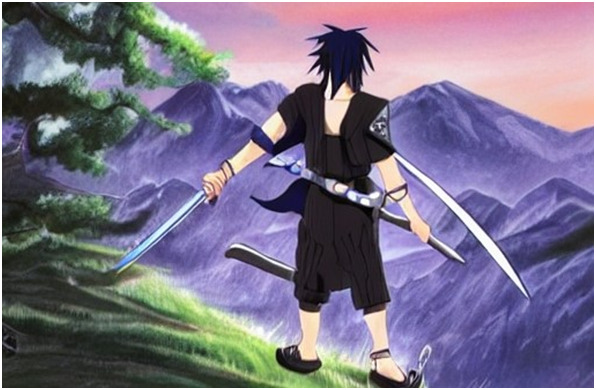 While Naruto, the show’s protagonist, is always smiling and welcoming, his friend and opponent, Sasuke Uchiha, is the complete opposite. Sasuke, lonely and solitary after the demise of his tribe, is determined to become a better ninja and avenge his people.

Some people think it’s less of a challenge to assume the role of the dark and dangerous antihero than it is to always play the role of the upbeat hero. Every cosplayer’s fantasy is to dress like Sasuke, with his striking dark hair, cool-toned clothes, and ever-changing dojutsu eyes.

The sword that Sasuke uses is quite formidable. It wasn’t wonderful due to the fact that it possessed special abilities or magical qualities; rather, it was just a somewhat larger chokutō. Instead, Sasuke’s own abilities, specifically his lightning chakra, were used to hone and improve the effectiveness of this weapon.

Chakra infusion extended the sword’s cutting edge and sharpened the blade. By using this method, the sword could cut through a wide range of materials and make whoever it hit numb to pain. Shop at IceImports.com to purchase Sasuke’s sword.

Orochimaru, a well-known bad guy from the Naruto series, taught Sasuke how to use his lightning chakra. After that, he started carrying the Sword of Kusanagi. When Naruto and Sasuke first clash, the sword is black, but after their battle, it is shown to be white and emblazoned with the Uchiha clan emblem.

One of Sasuke’s first learned ninjutsu techniques is the chidori ninjutsu, which he can employ with his sword. This manifests itself in a wide variety of ways, all of which are subject to Sasuke’s control. In the world of Naruto, “kenjutsu” means any technique that is done with a sword.

One of Sasuke’s most amazing skills is that he can put chidori into the chokutō and turn it into a lightning sword. When Sasuke strikes an opponent with the chidori-infused Kusanagi, the electricity surges through the body, paralyzing them.

Cosplaying as Sasuke is hard, and one of the hardest parts is acting like him once you have his hair, clothes, and replica sword. Sasuke is aloof, uncaring, ruthless, cynical, a little sarcastic, and a little haughty. The best way to channel his demeanor is to carry around a prop version of Sasuke’s sword and appear arrogant.

It’s safe to assume that Sasuke’s normal expression is a scowl, but the Death Glare is what you’ll see when he’s truly riled up. Make a stern face by furrowing your brow and arching your eyebrows dramatically; then, look intently, as if you were trying to use your eyes to punch a hole in the wall.

Want to really ramp up your Sasuke game? Cultivate your Japanese language skills. The ability to speak even a small amount of Sasuke’s lines in the series will set you apart from other cosplayers and introduce you to a whole new dimension of Naruto.

Making sure everyone understands who you’re meant to be, requires you to know some nice Sasuke quotes and one-liners. You should occasionally mutter one of his catchphrases, such as “It’s not the future I dream of anymore, only the past,” while lowering your voice and giving someone the Death Glare.

Sasuke is a skilled and dangerous swordsman who can deliver powerful blows with pinpoint accuracy. Maintaining proficiency in swordsmanship calls for a lifetime of effort.

Learning swordsmanship isn’t something you can do in a day, and you risk significant injury if you experiment with real blades. If you’re interested in learning how to use a sword, it’s best to do it in a structured academic setting, and anyone who isn’t proficient in the usage of a sword should definitely invest in one of our Sasuke swords.

How to Get the Sasuke Look

Sasuke’s character development throughout the Naruto series is driven by his desire to one day destroy his older brother, Itachi. There can be no retribution if the proper look from top to bottom is absent.

Start your Sasuke cosplay by donning the signature black Sasuke spiky wig. Then, put on Sasuke’s outfit, along with an Akatsuki cloak and a ninja headband, as shown in the Naruto series. Get the full Sasuke effect by accessorizing with a sword and sheath, both of which can be found on IceImports.com.

Planning on being Sasuke Uchiha at the next AnimeCon? Check out IceImports.com to order not one but two of our Sasuke swords, one for sword fight practice and one for the big event.