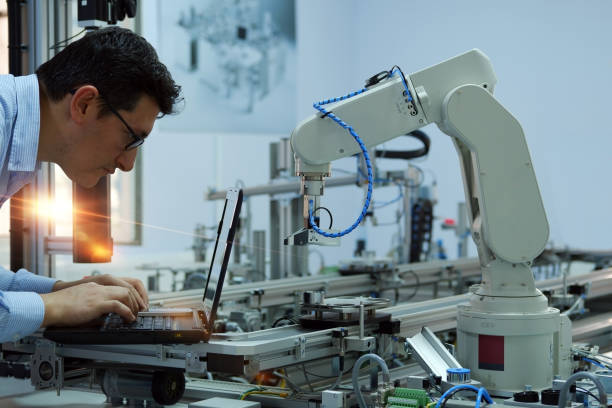 Automation is necessary for manufacturing industry to improve productivity and cost efficiency. Programmable Logic Controller (PLC) is an industrial computer used for automating the manufacturing process. It is widely used in various industrial applications like assembly line applications, water tank quenching system, feeding control system, closed loop textile shrinkage system, etc. The user could program these devices to execute a sequence of events. These events are activated by inputs received at the PLC. Once an event occurs, an electronic control gear or switch is activated which initiates some specific actions on some external devices. The PLC will continuously monitor the inputs and control the outputs based on the conditions of the inputs. The manufacturers of PLC provide extensive tech support for the PLC problems in the field.

PLC programs are generally written on a desktop or laptop using some specific applications and then downloaded into the PLC through serial ports or network. The downloaded program is stored in flash memory or nonvolatile RAM of the PLC. A PLC could be programmed using several standard languages. As per IEC 61131-3 standard, five PLC programming services languages could be used for programming PLCs. Those five authorized languages are Sequential Function Chart, Structured Text, Ladder Diagram, Instruction List and Functional Block Diagram. Though all PLC manufacturers follow the common fundamental principles of PLC programming, but different memory mapping, input output mapping and instruction sets made one PLC incompatible with another. PC support for PLC programming problems is provided by the particular PLC manufacturer.

Sequential Function Chart or SFC is a graphical programming language, used to program PLCs. It is defined in the IEC 848 standard under the title of “Preparation of Control Charts for Control Systems”. The basic components of SFC are – steps with related actions, state transition, relation between steps and state transition. In an SFC diagram, a step could be either inactive or active. Only active step’s actions are carried out. There are two reasons for activating a step. The first reason is that it is an initial one configured by the programmer. The second one is that it was triggered in the scan cycle and has been deactivated afterward. Steps could be triggered only after all the previous steps are made active. Writing a program using Sequential Function Chart is a quite difficult task for a beginner. In such cased the user should consult a veteran pc support provider.

Structured Text is a high level programming language, specifically used for programming PLCs. It is organized in blocks. IEC61131 standard defines the functions and variables. Manufacturers of PLCs provide some readymade programs written in Structured Text, which could be modified to suit the application of the user with help of a network support provider.

Ladder Diagram is a programming language which employs graphical diagram to describe a program visually. The graphical diagram is usually based on the relay circuit hardware. It has been developed particularly for writing program for PLCs. This is a very useful tool in developing simple as well as complex industrial control system. Sometimes Ladder Diagram is used along with Human Machine Interface (HMI) program which makes the process of automation much easier. Combining Ladder Diagram with HMI should be done by an experienced PC support provider.

What Is PLC Programming?

PLC programming is the method for creating the instructions, sequence, and calculations used by the PLC to automate a machine or process. The PLC is the hardware and the program is the intelligence. In a sense, the programmed PLC gives a machine a ‘brain’. PLC is an acronym for programmable logic controller. A PLC is device who has its origins in the 1960’s by a company named Modicum. Its first use was in the automotive manufacturing plants to replace the old relays arranged to create essentially relay logic. It was a simple decision and control system effective for the era, but as usual, a better solution is