Key Differences Between Ruby on Rails, Laravel, and Django That You Must Know

Among the most popular web development frameworks are Django, Laravel, and Ruby on Rails. Business firms, frequently become perplexed while seeking the greatest options for their initiatives. Choosing a framework for their project is a challenge for them. Discover the three main frameworks, their advantages, and which one is most appropriate and practical for you and your company by reading this blog. 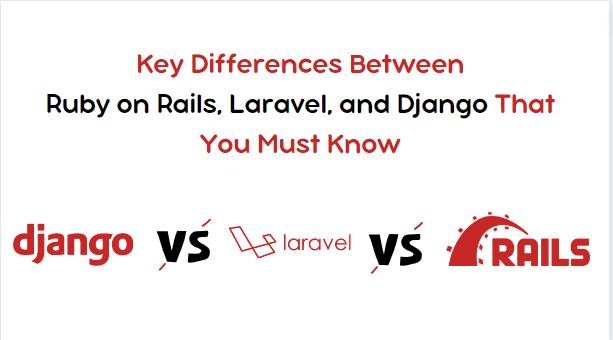 Django is a full-stack framework created in Python that was designed to allow quick and simple web development. When Simon Willison and Adrian Holovaty were managing large PHP websites for the Lawrence Journal-World, a daily newspaper, they realized they needed a faster, easier way to construct their websites.

They later learned about Python and developed a liking for it. They were not given the tools they desired, however, because of Python. So they began developing Django, which would aid them in creating websites.

It is the newest of the three frameworks and enables developers to easily add sophisticated functions. When Taylor Otwell began using CodeIgniter, he found that without significantly changing the code, he could not add all the features he desired. When he began looking for something more straightforward, leaner, and adaptable, Laravel was born. Laravel’s first release included technologies including built-in authentication, localization, routing, sessions, views, and models.

Being at the right place at the right moment helped Laravel acquire popularity. Other PHP frameworks at the time either offered little documentation or complicated features. On the other hand, Laravel was simple to use and had excellent documentation.

One of the most extraordinary gorgeous and opulent languages is Ruby on Rails, according to David Heinemeier Hansson. It makes creating apps simple and enjoyable. Hansson saw several parallels in the PHP apps he was developing when he was employed for 37signals. He was redoing work from previous applications for each new one. David thus began working on Ruby on Rails.

David made his initial try in PHP, but as he worked with it more, the more he felt like he was at odds with it. Hansson started working on the Basecamp project in the meantime and learned about Ruby, the language he was seeking for, there. For the Basecamp project, there was no prescribed technology, and David was free to select the tools he wanted. He developed the Rails framework while working on the project. He spent six months perfecting Rails after launching Basecamp before ultimately releasing it in 2004.

Why Are Custom Bakery Boxes Essential?

What Are the Benefits That Microsoft Dynamics 365 has?

7 Industries That Can Benefit from Customized T-shirts

7 Essential Visual Elements Of Graphic Design To Know About 

Easy Steps to Create a Webinar event and Go Live

Cool Tech Devices: The Ultimate Use In Your Smart Home

Plenty of interesting technological gadgets are on the market for making your home more energy-efficient.…

Why Are Custom Bakery Boxes Essential?

Key Differences Between Ruby on Rails, Laravel, and Django That You Must Know