The difference between unbuffered and registered RAM 2022 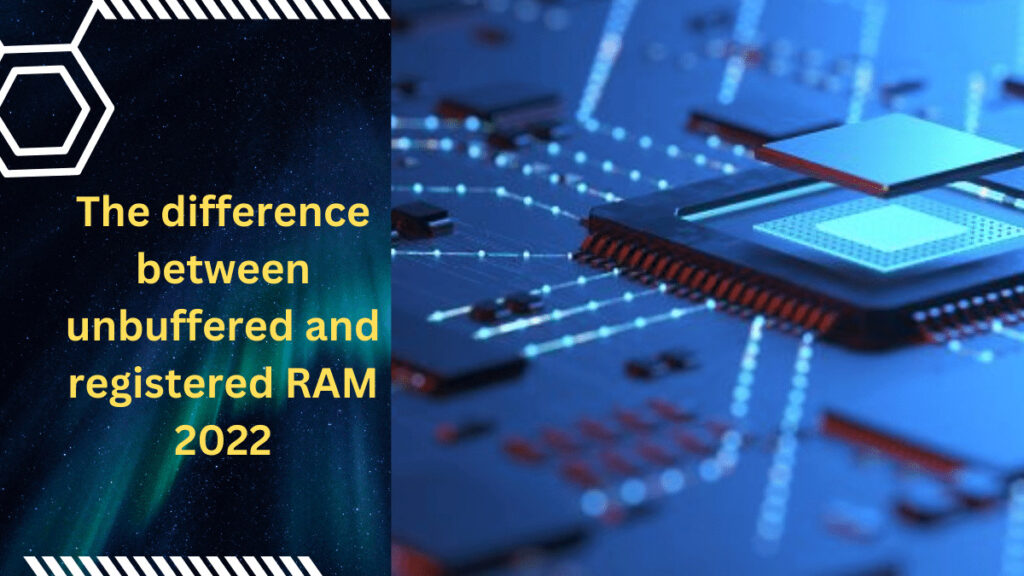 The RAM (Random Access Memory)  is the short-term memory of a computer. None of your Netflix shows, files, or streams would work without RAM, which is your computer’s workspace. But what exactly is RAM? In this article, we explain what RAM means in computing terms and why it is important.The Question The difference between unbuffered and registered RAM 2022 is quite common.
RAM stands for “random access memory” and, although it sounds very mysterious, it is one of the fundamental elements of computing. RAM is extremely fast and temporary data storage space that a computer needs to access immediately or in the next few moments.

The difference between unbuffered and registered RAM is often not known or the difference is not taken into account when expanding an existing system. When buying computer RAM modules, there are often misunderstandings that result in the customer not being able to do anything with the module supplied. Worse, the customer might feel ripped off because it doesn’t work in their configuration.

For computers, RAM is the volatile memory that the computer writes to and reads data from at runtime. No matter what type of computer it is, whether server, workstation, or personal computer (PC), all use RAM memory to store data. Of course, this also applies to the used servers that you can buy from bladeloop. The technology used may differ when using RAM in servers and PCs.

What is unbuffered RAM?

Conventional PCs usually have much less RAM installed than servers. Therefore, “unbuffered RAM” modules can be used in PC’s. The CPU’s processor or memory controller communicates directly with the chips installed on the RAM modules.

What is registered RAM?

Servers and large workstations have different requirements, specifically regarding the amount of memory installed. Mainly when servers are used for virtualization, they are equipped with a lot of RAM and start where PCs end. So a PC with 32GB of RAM is well equipped, but a server with the same amount is a bit weak on the chest.

Much more RAM is needed here. For this reason, servers and large workstations mostly use “registered RAM” modules. The registered modules are equipped with an additional chip that allows the memory controllers in the server Processors to be able to use a very large amount of RAM. Since the controller then does not have to communicate with each module individually, it is relieved by using registered RAM modules.

What is ECC RAM?

For example, if a module has the designation PC3-12800R, the letter “R” indicates that the module is registered RAM with ECC. The chip can be seen in the middle of the register in the figure.

The identifier L, e.g. PC3-14900L, indicates a load-reduced RAM module. This memory is used in modern servers and uses a memory buffer to relieve the server’s memory controller of work. This allows the memory density in a server to be increased because L modules have 32GB, 64GB, or 128GB capacity per memory module.

E – unbuffered RAM with ECC for “small” servers and workstations

If modules are marked as PC3-12800E, for example, they are unbuffered RAM with ECC correction. For example, these are the modules that work on some boards for AMD desktop processors.

U – unbuffered RAM without ECC for PCs

The U is often left out of the modules for PCs so that the appropriate RAM modules are called either PC3-12800 or PC3-12800U. These modules are the right ones if you want to equip a desktop computer or PC with additional memory. Unfortunately, the bladeloop shop does not offer this memory.

Which modules do I need?

The safest way is to consult the motherboard manual to find out which RAM modules to buy. But even without a manual, you can roughly estimate what memory is required.I try to explain to you The difference between unbuffered and registered RAM 2022.

You almost certainly need the U unbuffered RAM without ECC.

These systems usually have only one processor. Your system may support ECC, then you can use E unbuffered RAM with ECC. Registered modules can often also be used in workstations with a Xeon CPU.Now, The difference between unbuffered and registered RAM 2022 is not difficult for you.

Large servers and all used servers from the blade loop shop use registered (R) or load-reduced (L) ECC memory. These servers are equipped with two or more processors and can manage large amounts of RAM memory.

Hope You know the answer now: The difference between unbuffered and registered RAM 2022

Also Read: A Detailed Overview Of What Is A Contactor? Its Construction and Working

What exactly is Data Analytics” and why does it really matter?

The Battle of the Best Laptops: Alienware vs. MacBook

SEO Vancouver – The Best Place To Get The Most Out Of Your Technical SEO Efforts!

The Best Tattoo Removal Services In The UK

If you’re getting a tattoo, one of the first things you’ll want to do is…