How Web3 And Blockchain Are Transforming The Gaming Industry  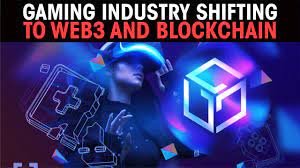 One such business that never ceases to captivate the public is the video game industry. Players always had the best gaming experience thanks to it. Since the introduction of the first video game in 1958, the gaming business has continually been successful in eliciting sincere feelings in its audience.

As gaming technology takes over the world, gaming companies have a tremendous opportunity to profit from the ongoing development of blockchain technology. Game development companies provide outstanding solutions to gaming organisations.

Playing decentralised blockchain-based games is one of the most demanding pastimes you can engage in in terms of investment or enjoyment. Your only purchases up to this point have been games, game accessories, and specialised items for the gaming platform. However, people can now earn money by playing video games and buying unique digital goods that are expensive.

The creation of decentralised gaming systems is the most lucrative sector to join. In order to reach as many customers and investors as possible, international enterprises are changing and integrating into the blockchain industry. Here, we can see how Web3 Wallet Development and the blockchain are advancing the gaming sector and offering a fantastic venue for investing in gaming platforms.

Blockchain’s Use In Gaming
One of the sectors with the fastest global growth is the gaming business. Recent technological advancements have led to a rise in the use of video games.
Transactions are secure, transparent, and untraceable thanks to a distributed database known as blockchain. Given the need for quick and safe transactions in the gaming business, it is a suitable choice.

Blockchain technology is creating a lot of buzz in the gaming business. The primary benefit is that it secures and expedites transactions. Second, it does away with the necessity for middlemen, which might help you save time and money. Thirdly, it offers the immutability and transparency necessary to guarantee fair play. Blockchain is expected to be used by more game firms in the years to come given its many benefits.

Gaming Platforms Using Web3
Blockchain technology is used to create Web3 games, which give players a role in how and when the game should change. The gaming business benefits from user control and access to in-game digital assets thanks to web3 technology. As gaming NFTs, these specific materials are kept.

By connecting in-game assets and players across platforms, web3 gaming significantly increases interoperability among multiple gaming ecosystems. The kind of blockchain platform that is used to create a gaming environment will determine interoperability.

Bringing Blockchain And Games Together Is a Great Idea
Blockchain is a cutting-edge technology that is improving businesses, especially in the gaming industry. Here are some critical assessments of how blockchain game application development companies are utilising cutting-edge technology for a true gaming experience and also play-to-earn options, as well as how the blockchain is changing the gaming experience of customers.

Any unique things that a player earns after finishing a task successfully remain belong to the firm, and they cannot be transferred or sold after that. On the NFT gaming platform, which is based on the blockchain, however, the player gains complete ownership of the special object and is free to sell or auction it in order to profit. The NFT game production businesses are providing a great platform for gamers to both enjoy and profit from their favourite games.

Additionally, a benefit of the blockchain-based gaming platform is that each NFT a player receives through play-to-earn is exclusive and cannot be possessed by anyone else. However, the conventional gaming platform just offers one thing to lots of players or customers.

Take one of the video game platforms, for instance, where the goal is to survive until the very last player. The same collected items are given to players who have finished a particular game stage.

Today’s video games can be hacked or have bugs that make playing them less enjoyable for everyone. However, since it functions without a hitch, the user experience is not compromised during the construction of blockchain game apps. The platform enables transaction completion in a matter of microseconds and the secure completion of thousands of transactions in a single second. Without a doubt, this is increasing revenue in the gaming sector.

With the use of blockchain technology, game designers can construct secure, inexpensive, and transaction-intensive gaming environments with always-winning rules that reward players by letting them earn money while playing.

Attractive Web3 Features To Improve Blockchain Game Development
Blockchain
The game proceeds without incident because everything has been set up in the back. Information is delivered in chunks using time stamps and encryption to preserve the integrity of the game’s assets.

Sensible Contract
Smart contracts confirm the details of a transaction. It focuses on the smallest modifications taking place throughout the entire system. To keep track of their assets, games may use smart contracts with precise computations and results.

Gaming Transparency
Games in Web3 gaming are hosted using a distributed hosting paradigm, which makes them unbreakable. Blockchain-based gaming relies on voter consensus to update the game’s mechanics and has no single point of failure. Every network user has equal access to it as well. Web3 gaming enables this level of openness.

Technology Driven by Players
The game ecology in web3 gaming is modified based on user preferences. Players may gain from web3 gaming in a variety of ways. The first is the “Play to Earn” element, which allows users to earn money through in-game purchases, and the second is the “Old-Game Integration,” which meets users’ desire to play their preferred games in the Metaverse. Self-sovereignty is another characteristic of player-driven gameplay that is provided by Web3 gaming and is once again advantageous to players.

Players’ Reasons for Selecting the Web3 Gaming Platform
Play-To-Earn
In the Web 3 age, gamers will be able to make money playing video games. Players can now purchase products from the market with real money and then resell them to other players inside or outside of the virtual world. More than half of all gaming revenue comes from in-app purchases generated through in-game IAPs in video games. Even if they do, users in online games do not actually own the in-game objects they buy. Access to an endless supply of in-game stuff is only possible through IAPs.

Adaptive
Games on Web 2.0 could be updated, but their developers tended to be reluctant to do so because doing so might violate the terms of service. This is perhaps why users weren’t allowed to make updates to the game. The only feature of Web 3.0 that enables game customisation is its open-source architecture, which enables players to adapt the game to their preferences.

electronic ownership
Blockchain technology offers you ownership of assets even after a sale by tying them to players rather than to specific games. Due to the fact that all transactions are transparent thanks to blockchain-based technology, developers are unable to readily misuse or exploit users’ card information, protecting investments and guaranteeing fair play in gaming settings. Blockchain technology will allow for the ownership of in-game goods, digital marketplaces, and artificial scarcity. In Web 3.0, there will only be a limited supply of each item, and participants will then fully own it once it has been purchased.

Conclusion
The world is being consumed by the constant need for gaming platforms in the blockchain industry. The web3 development firm is showcasing exceptional talents and high-end features, making the next gaming applications a perfect area to create cash. Web3 is a brand-new, strong platform with excellent potential.

Be Better At Golf With These Great Tips!

Having the chance to buy a new car is one of life’s most thrilling experiences.…